Pinckney Bend was a navigational hazard well-known to generations Missouri River boatmen. Located at mile marker 83 above St. Louis, it is the site of a once-thriving town long since disappeared, and a stretch of river where at least five 19th century steamboats were wrecked, including the famous side-wheeler Spread Eagle. 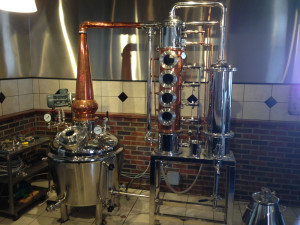 Today its namesake, the Pinckney Bend Distilling Company in New Haven, several minutes from Hermann Missouri, celebrates the legend and lore of this vanished town. The river has changed course since those early days, but standing on the levee not far from the distillery’s front door and looking westward, you can almost see where the town of Pinckney once stood.

Daniel Boone, trying to escape the encroachment of civilization in Kentucky, pioneered this wild section of Missouri in 1799 and built a house not far from the river,. But his solitude was brief. In just five years ownership of this vast and largely unexplored wilderness passed from Spain, to France, to the newly established United States of America. In 1804 President Jefferson sent Meriwether Lewis and William Clark on an expedition to take a look at what exactly he had bought with the Louisiana Purchase.